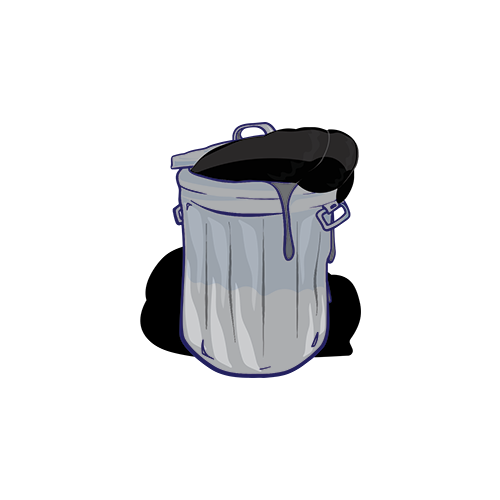 Hi there, my name is Ryan Broderick. I’m a freelance tech reporter who’s recently written for outlets such as The Nation, The Verge, Foreign Policy, Polygon, and Eater. I also currently host a weekend show for the audio news app Curio. Last year, I started publishing an independent newsletter called Garbage Day full-time. And, amazingly, since then, Garbage Day has grown in ways I could have never imagined.

The newsletter has been cited in outlets such as the Guardian, NY Mag’s The Cut, ABC News, the New York Times, and Poynter. I’ve also had the chance to interview some amazing people like Ryan North, the creator of Dinosaur Comics, Substack CEO Chris Best, Neeraj Agrawal, director of communications for Coin Center, and Mastodon founder Eugen Rochko.

Even more incredibly, Garbage Day has launched its own Discord server, which now has over 800 users. I’ve also helped build another Discord server for a network of independent writers called Sidechannel, which has over 5000 users. Garbage Day has its own merch store, supports a podcast called The Content Mines which has around 2000 downloads a week, and I’ve also begun experimenting with a YouTube channel. It’s been a big year!

But, most importantly, Garbage Day’s readership has grown by over 10,000 users since last August. It’s also just been a hell of a lot of fun.

So if everything’s good, you might be asking, what is this? Why am I crowdfunding on Mirror? Well, everything I’m doing right now, I’m doing myself. Garbage Day’s paid subscriptions have grown steadily, but, as I’ve entered my second year of doing this, I worry about the sustainability of subscriptions overall, but there are also bigger projects I’d like to sink my teeth into. Also, thanks to an extremely nasty case of food poisoning a few weeks ago which almost derailed my publishing schedule, I realized that working completely on your own has some downsides. I want to take some steps to make sure Garbage Day doesn’t completely and totally rely on me.

With the way the internet is currently constructed, you essentially have three options for building out creative projects: do them and fund them yourself and hope for the best, grind on a corporate-owned platform posting low-value content until you have enough scale that you can build a hype house of wage slaves to help you, or find a company and try and convince them to fund your project. I think all three of these options have issues.

I’ve also just been deeply inspired by other creators like John Palmer, Kyle Chayka, and Mario Gabriele who have used Mirror to take their online projects to the next level. I’m interested in exploring what Garbage Day can be beyond just a newsletter and I think the Mirror community can help me do that. I’m also just curious about NFTs! I’ve written a lot about cryptocurrency, NFTs, financial memetics, and the metaverse this year, and I’m interested in exploring what you can really do with them. I figure, if this whole campaign doesn’t work out, I can, at least, write about it.

Garbage Day is, first, a newsletter about the weird and oftentimes idiotic world of technology and web culture. It’s meant to be a fun thing that you can read during that 3 P.M. period of your workday where you’re contractually obligated to continue to look at a screen, but you don’t have any more actual work to do. But as it has grown into a larger project, with a podcast, a YouTube channel, and merchandising, it has, also, in my opinion, shown signs of being able to grow into something a bit bigger. I want to use it to promote an idea that I’m calling, for lack of a better word, “farm-to-table internet.” It’s the belief that the content we consume on the internet doesn’t have to be created by massive corporations and distributed by algorithms we have no control over, nor should it have to reach the most amount of users humanly possible to deserve to exist. The internet is best when it’s weird and owned by people. And it’s because of this belief that I’ve ended up here on Mirror.

The common comparison for NFTs is that they’re digital collectibles, but I think, more broadly, that they’re actually little pockets of the internet that we’ve given both ownership and value to, which, feels like a really good step in the right direction away from the digital sharecropping publishers are doing on Facebook and Instagram right now.

Here’s how I’m organizing the crowdfunding…

I’ve picked 10ETH as my main goal with a stretch of 12ETH. I see it as a nest egg that can help turn Garbage Day the newsletter into this bigger media project. Here’s where that money will go:

I’m not interested in chasing viral scale, which I think is both bad for the world and bad for publishing, but I am interested in using this crowdfund to build a business that lasts. So far, with any money I’ve made with Garbage Day, my big focus has been on using it to make my readers happier. That is, in my opinion, the only real objective!

I don’t know what to expect from all this to be honest, but I’m excited to find out. I’m offering three NFT tiers, two of which are based on a shirt I had commissioned to celebrate Garbage Day breaking 10,000 readers back in January. The design was created by Christopher Dillen Phelps, who nicknamed our little zombie friend Melty and he’s been animated by Jon Hanford. The third design was designed by Jon Hanford and has also been turned into a piece of merchandise on the Garbage Day store. The little man with the sign doesn’t have a name yet. Would love to hear some suggestions!

I’m also extremely interested in connecting digital assets to tangible goods and services, so, beyond the $GRBG tokens that Mirror has connected to these NFTs, there are also some other benefits for backers:

It should go without saying that for any backer who isn’t interested in any of these bonus benefits, they aren’t mandatory. As for how they will be given out, most likely it’ll be via email or Twitter. I’m also happy to hear other ideas for how to get people what they’ve paid for.

I am really curious about fun ways to use the $GRBG tokens created by this crowdfund. I’m retaining 10% of the tokens generated from this batch, just to mess around with them. I love the idea of using tokens to create shared digital ownership and depending on how this crowdfund goes, my mind buzzes with other ways to use tokens. Could they work as merch coupons or tickets to live events? If anyone reading this has any fun ideas for how to use them, let me know! This technology seems perfect for weird internet experiments and I’d love to mess around with it.

If all of this goes well and reaches the goals I’ve set for it, I want to continue exploring how cryptocurrency could fund media projects. In June, when the Mirror team sketched out the concept of a “media DAO,” I realized that there are so many other ways to finance digital media than what we’ve seen so far. I plan to continue using Mirror to document my work on all of this.

I mean, there just has to be other options for funding digital projects than chasing sociopathic levels of viral scale or publishing the lowest common denominator content with the hopes of receiving trickle down advertising benefits from online advertising. Right? Over the last year, the internet has become so much bigger than platforms like Facebook and Twitter and publishing Garbage Day has opened my eyes to things I could have never imagined. I’m so excited to see what’s out there in the deep waters of the internet.

If there’s anything I did completely wrong here let me know haha, this is both my first time using NFTs, tokens, AND crowdfunding. You can DM me on Twitter @broderick, my inbox is open. Thanks for helping me with this crazy little experiment!